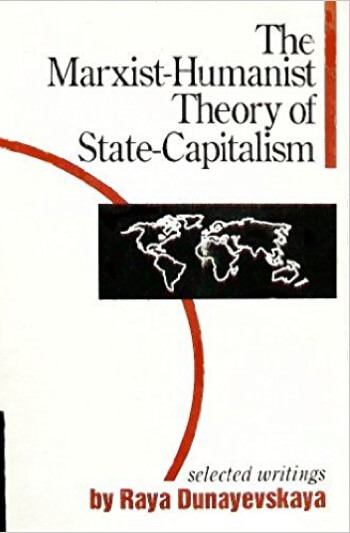 This collection of 17 writings by Raya Dunayevskaya (1910-1987), founder of Marxist-Humanism in the U.S., contains a selection from her vast writings on the theory of state-capitalism, ranging from her original analysis of Russia as a state-capitalist society in the early 1940s to writings on the global phenomenon of state-capitalism from the 1940s to the 1980s. For development of this theory proved of critical importance in her creation of a new philosophy of dialectics for the post-World War II age – Marxist-Humanism. Re–examining her theory of state-capitalism today, both in terms of its origin in the 1940s and its further development as a dimension of Marxist-Humanism from the 1950s to the 1980s, can help disclose the meaning of the collapse of Communism in Russia and Eastern Europe as well as provide direction for working out philosophic new beginnings in the 1990s. — from book’s back cover