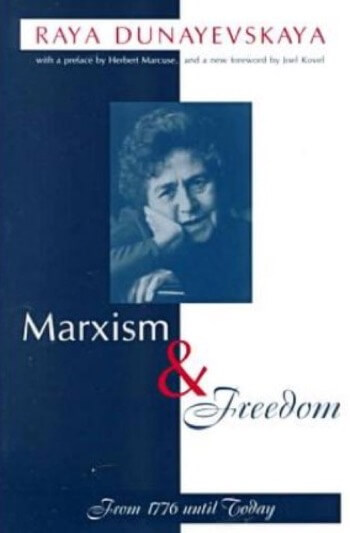 Author(s): Raya Dunayevskaya
Release Date: May 01, 2000
Publisher: Humanity Books
ISBN-10: 1573928194
ISBN-13: 978-1573928199
In this classic exposition of Marxist thought, Raya Dunayevskaya, with clarity and great insight, traces the development and explains the essential features of Marx’s analysis of history. Using as her point of departure the Industrial and French Revolutions, the European upheavals of 1848, the American Civil War, and the Paris Commune of 1871, Dunayevskaya shows how Marx, inspired by these events, adapted Hegel’s philosophy to analyze the course of history as a dialectical process that moves “from practice to theory.” The essence of Marx’s philosophy, as Dunayevskaya points out, is the human struggle for freedom, which entails the gradual emergence of a proletarian revolutionary consciousness and the discovery through conflict of the means for realizing complete human freedom.

But freedom for Marx meant freedom not only from capitalist economic exploitation but also from all political restraints. Continuing her historical analysis, Dunayevskaya reveals how completely Marx’s original conception of freedom was perverted through its adaptations by Stalin in Russia and Mao in China, and the subsequent erection of totalitarian states. The exploitation of the masses persisted under these regimes in the form of a new “state capitalism.”

Yet despite the profound derailment of Marxist political philosophy in the twentieth century, Dunayevskaya points to developments such as the Hungarian revolt of 1956, and the Civil Rights struggles in the United States as signs that the indomitable quest for freedom on the part of the downtrodden cannot be forever repressed. The Hegelian dialectic of events propelled by the spirit of the masses thus moves on inexorably with the hope for the future achievement of political, economic, and social freedom and equality for all.

Arabic translation, published in 2010 with the support of the Victor Serge Foundation.

Chinese translation, published in 1998 with a preface by Wang Ruoshui.