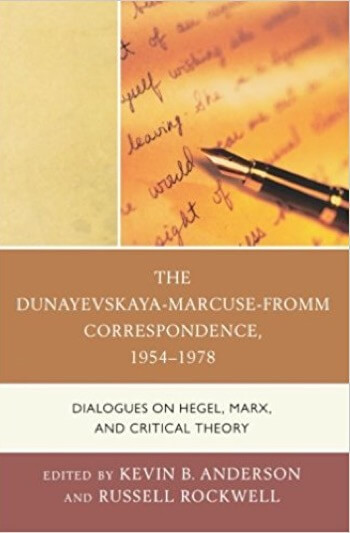 This book presents for the first time the correspondence during the years 1954 to 1978 between the Marxist-Humanist and feminist philosopher Raya Dunayevskaya (1910-87) and two other noted thinkers, the Hegelian Marxist philosopher and social theorist Herbert Marcuse (1898-1979) and the psychologist and social critic Erich Fromm (1900-80), both of the latter members of the Frankfurt School of Critical Theory.

In their introduction, editors Kevin B. Anderson and Russell Rockwell focus on the theoretical and political dialogues in these letters, which cover topics such as dialectical social theory, Marxist economics, socialist humanism, the structure and contradictions of modern capitalism, the history of Marxism and of the Frankfurt School, feminism and revolution, developments in the USSR, Cuba, and China, and emergence of the New Left of the 1960s. The editors’ extensive explanatory notes offer helpful background information, definitions of theoretical concepts, and source references.

Among the thinkers discussed in the correspondence – some of them quite critically– are Karl Marx, G. W. F. Hegel, Rosa Luxemburg, Georg Lukács, Theodor Adorno, Max Horkheimer, Jean-Paul Sartre, Simone de Beauvoir, V. I. Lenin, Nikolai Bukharin, Sigmund Freud, Leon Trotsky, Mao Zedong, Daniel Bell, and Seymour Martin Lipset. As a whole, this volume shows the deeply Marxist and humanist concerns of these thinkers, each of whom had a lifelong concern with rethinking Marx and Hegel as the foundation for an analysis of capitalist modernity and its forces of opposition.

“[This work] could not have been published at a better time. In addition to an increase of interest in the works of all three thinkers, we are also seeing new social developments that each of them would find it necessary to respond to. This volume discloses the theoretical develop of Dunayevskaya, Marcuse, and Fromm as they engaged the social and political struggles of their day. It is evident that we can learn from them today.”

“This supple meditation on the exchange among three of the most important thinkers of the twentieth century is an absorbing, stimulating and fiercely illuminating contribution to radical philosophy. And further, this collection of correspondence between Dunayevskaya, Marcuse and Fromm is not only historically significant from the perspective of philosophical aficionados, but limpidly demonstrates the continued relevance, if not urgency, of the work of these iconic thinkers for the present historical juncture. And most significantly, the volume speaks to the growing importance of Marxist humanist philosophy for a radical transcendence of domination and oppression as a concrete historical possibility for our times.”

“This book is an excellent treatment of an understudied area in the history of the development of Frankfurt School Critical Theory in the U.S. and its intersections with Marxist Humanism. It delivers an original piece of work in the Critical Theory/history of the Frankfurt School literature; it fills an important gap by making the connection between these three important Marxist theorists who all evolved intellectually in the context of the U.S. and emigrated from Europe; and it presents material that will challenge historians of radical thought in the U.S. from the 1950s to the 1970s as well.”

“Anderson and Rockwell’s edited collection of the correspondence between Raya Dunayevskaya and first Herbert Marcuse, then Erich Fromm, brings Marxist humanism to life. These letters give the reader a close view of these three major theorists’ understanding of the movements and issues of these decades, and of their sometimes corresponding, sometimes clashing political and theoretical outlooks. Anderson and Rockwell’s introduction places these dialogues in context, tracing the political and intellectual evolution of each of the authors, and highlighting the importance of the issues that they grapple with. This collection is a crucial resource for anyone wishing to understand Marxist humanism, the range of views within it, and its relation to Critical Theory.”

Part One: The Dunayevskaya-Marcuse Correspondence, 1954-78

1. The Early Letters: Debating Marxist Dialectics and Hegel’s Absolute Idea
2. Dunayevskaya’s Marxism and Freedom and Beyond
3. On Technology and Work on the Eve of Marcuse’s One-Dimensional Man
4. The Later Correspondence: Winding Down During the Period of the New Left

5. The Early Letters: On Fromm’s Marx’s Concept of Man and His Socialist Humanism Symposium
6. Dialogue on Marcuse, on Existentialism, and on Socialist Humanism in Eastern Europe
7. On Hegel, Marxism, and the Frankfurt School in the Period of Dunayevskaya’s Philosophy and Revolution
8. The Final Letters: On Critical Theory and on Rosa Luxemburg, Gender, and Revolution