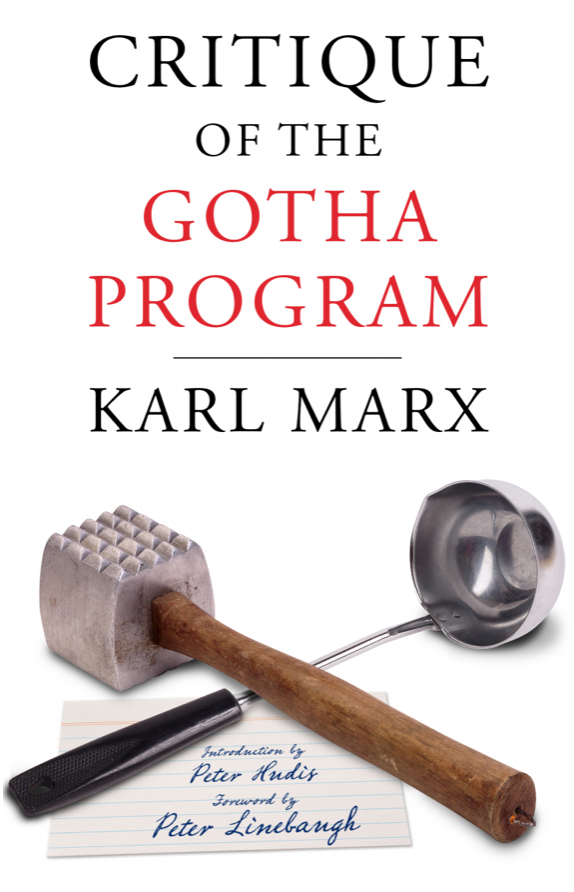 Marx’s Critique of the Gotha Program is a revelation. It offers the fullest elaboration of his vision for a communist future, free from the shackles of capital, but also the state. Neglected by the statist versions of socialism, whether Social Democratic or Stalinist that left a wreckage of coercion and disillusionment in their wake, this new annotated translation of Marx’s Critique makes clear for the first time the full emancipatory scope of Marx’s notion of life after capitalism. An erudite new introduction by Peter Hudis plumbs the depth of Marx’s argument, elucidating how his vision of communism, and the transition to it, was thoroughly democratic. At a time when the rule of capital is being questioned and challenged, this volume makes an essential contribution to a real alternative to capitalism, rather than piecemeal reforms. In the twenty-first century, when it has never been more needed, here is Marx at his most liberatory.

“This is a compelling moment for a return to Marx’s most visionary writings. Among those is his often neglected, Critique of the Gotha Program. In this exciting new translation, we can hear Marx urging socialists of his day to remain committed to a truly radical break with capitalism. And in Peter Hudis’s illuminating introductory essay we are reminded that Marx’s vision of a society beyond capitalism was democratic and emancipatory to its very core. This book is a major addition to the anti-capitalist library.” —David McNally, Distinguished Professor of History, University of Houston and author of Monsters of the Market

“In their penetrating account of Marx’s famous hatchet job on the 19th-century left, Hudis and Anderson go to the heart of issues haunting the left in the 21st century: what would a society look like without work, wages, GDP growth, and human self-oppression.” —Paul Mason, writer for New Statesman and author of Postcapitalism: A Guide to Our Future

“This new edition of Marx’s Critique of the Gotha Program, with an illuminating introduction by Peter Hudis, confirms that to re-translate is not only to re-animate old questions in the body of new words, but is also to propel writing towards contemporary exigencies. Arcing across times, the then of a first articulation connects to the now of hindsight and to the unwritten terms of an open future. While the delusions of Real-Existing State Socialism have dispelled, confusions around the role of the state in an emancipating society persist. In this short metatext, Marx’s snappish commentaries and his forensic dissections of weasel words and hollow phrases reveal how language matters, because it conveys and betrays ideology, policy and underlying standpoints. Translation works with this malleability of language. Meaning turns on a dime: political orientation can be realigned, if the slogan evinces exactitude, acknowledging history and horizons of possibility. We should learn, through this book, to read closer, better and in dialogue. —Esther Leslie, Professor of Political Aesthetics, Birkbeck College, University of London, and author of Walter Benjamin

“Critique of the Gotha Program is a key text for understanding Marx’s vision of an emancipated society beyond capitalism. With an excellent introduction by Peter Hudis, this new translation is both timely and important. Returning to Marx’s pathbreaking essay can give new direction to the political struggles of our time.” —Martin Hägglund, Yale University, author of This Life

“This new translation of Marx’s Critique of the Gotha Program includes an introductory essay by Peter Hudis, which points to Marx’s distinction between value, that is, the socially-necessary time required to produce a commodity, and labor itself, that is, the actual number of hours a worker engages in. He provides a provocative and useful critique of Lenin’s conception of the transition to socialism, and of subsequent Marxist-Leninist and social democratic conceptions of a socialist society. This raises questions about the nature of both labor and value in a society in which both have been transformed by technology. Nevertheless Hudis’ analysis provides a clarifying and useful critique of both social democratic and Marxist-Leninist conceptions of socialism/communism.” —Barbara Epstein, Professor of the History of Consciousness Studies, University of California, Santa Cruz, and author of Political Power and Cultural Revolution

“The Critique of the Gotha Program is one of Marx’s great strategic texts, often cited but little read. At a time when the questions of transition and of the forms of organization to exit capitalism are so urgent, this new edition should be saluted. Elaborated by the Marxist-Humanist tendency, it makes a valuable contribution, thanks to the way it situates Marx’s Critique in historical perspective.” —Isabelle Garo, editing committee, Grande édition des Oeuvres de Marx et Engels, Paris

“The proletarian revolution implies the end of the state…. In this period the objective is not simply to destroy the state… but to let society as a whole—the transformed society—take over the functions previously performed by the state.” —Henri Lefebvre

“The old Protestant ethics of work was resurrected among German workers in secularized form. The Gotha Program already bears traces of this confusion, defining labor as ‘the source of all wealth and all culture.’ Smelling a rat, Marx countered that ‘…the man who possesses no other property than his labor power’ must of necessity become ‘the slave of other men who have made themselves the owners…’ However, the confusion spread, and soon thereafter Josef Dietzgen proclaimed: ‘The savior of modern times is called work.’” —Walter Benjamin

“The primitive idea of freedoms essentially guaranteed by Law and State is annulled precisely by the grandiose final aim of communism, now already visible to us. It will be replaced by future forms of consciousness in the ‘new life’ of the ‘higher phase of communist society.’” —Karl Korsch

“Marx had worked out his whole theory of human development in Capital and in the organizational document, The Critique of the Gotha Program—because his principle, a philosophy of revolution, was the ground also of organization. In a word, it was not only the state which Marx held must be destroyed, totally uprooted. He showed that the proletarian organization likewise changed form…. This, history shows, was not understood by the first post-Marx Marxists.” —Raya Dunayevskaya