Summary: Increasingly dire situation of unemployed in the US — Editors 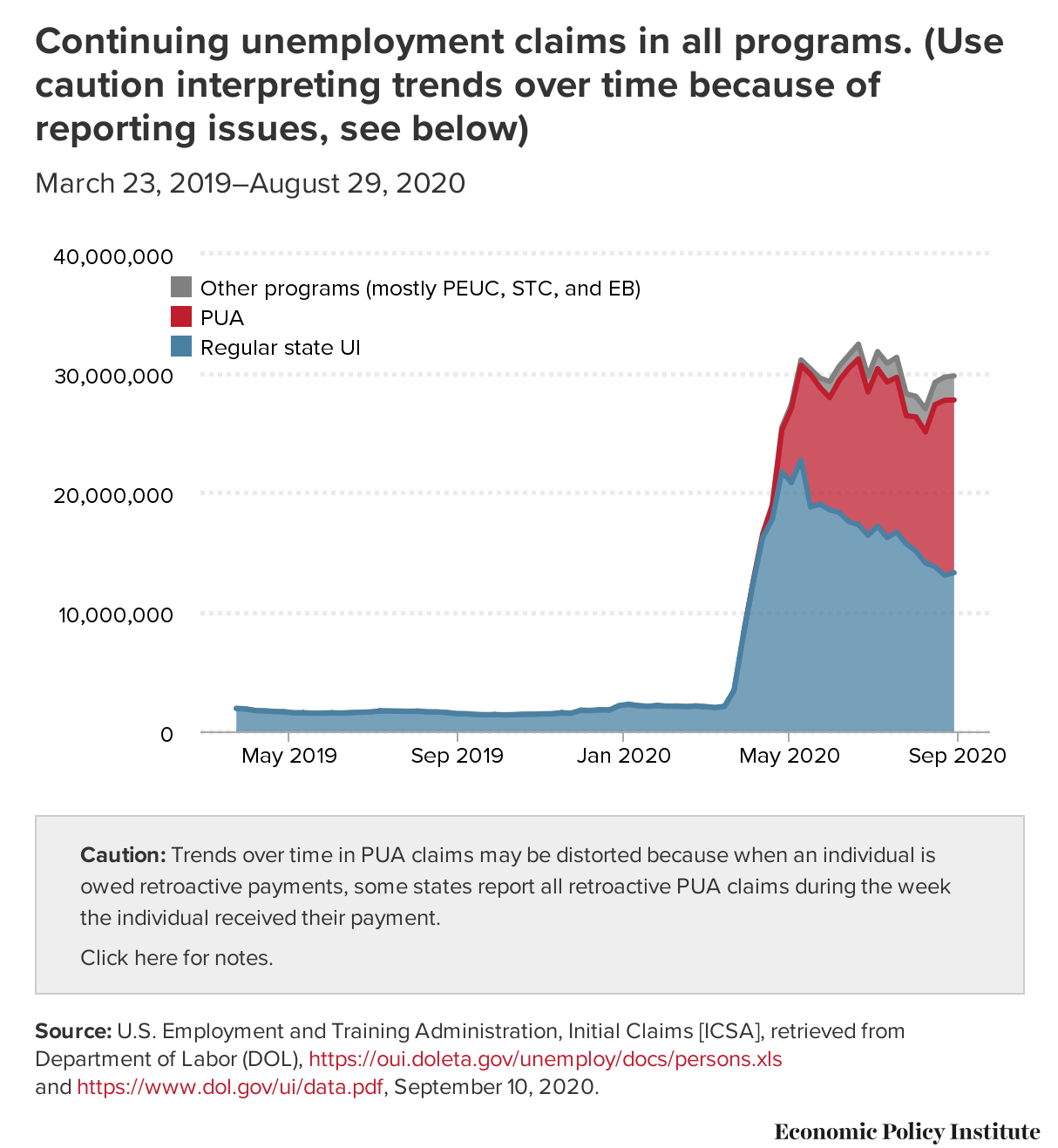 29.7 million Americans are currently receiving unemployment benefits. 14.4 million of them are getting PUA.

This is an undercount of unemployed citizens and residents as 12 million workers have yet to receive any payments because they fell through cracks of the byzantine system. (The author had to wait 2 months to receive benefits after stay at home orders started.)

In March Congress approved an extra $600/week for every unemployed person to be paid by federal government but this expired in late July. Trump signed an executive order that gives extra $300/week for a few weeks but because he put new requirements to receive it, it has taken over a month to implement and workers in California are barely starting to get these payments. Only 5 weeks of these benefits have thus far been approved in California.

Worst of all workers who get less than $100/week do not qualify at all for this $300 even though they previously received $600. An oversight in the coronavirus relief package in March made it so that if someone mainly got their income from independent contractor work but had a side job where they were paid as an employee they only qualify for regular unemployment amount much lower than what they would get if they were getting PUA on their main source of income.

Unfortunately, a further relief package including more unemployment benefits has stalled in Congress. For months Republicans have said they do not want to extend $600/week to the unemployed, they want a much lower extra amount, and do not want to give states other much needed aid even though they face sharply declined state revenues. States in the US are the ones who administer unemployment and social safety net programs, fund education, and provide basic services. It is quite possible there will be no more unemployment relief before the November election.

Food stamps, food banks, and eviction bans have cushioned the blow from the totally overwhelmed inadequate unemployment system so far. The average unemployment benefit in US is $1332/month. This is only $100 more than the average median rent in the United States. The average amount is also too much to qualify for Food Stamps for a single person as well.

The current situation is very uneven in terms of how the unemployed are suffering around the country. Florida which is particularly stingy pays the unemployed a maximum of $275/week. It also only provides unemployment for 3 months instead of the standard 6 months.

Florida declined to participate in further weeks of the extra $300/week because they refuse to pay their unemployed $100/week to get those funds. The extra $600/week was the only thing getting many through in these kinds of states.

The Economic Policy Institute has said that without the extra $600/week reduced spending would lead to 5 million job losses. We are not seeing it yet because many were able to save some of their unemployment, but the unemployment crisis continues, despite attempts to put lipstick on a pig because some workers have gone back to work.

Unemployment usually only last 6 months in the US, but at least 13 weeks of extra benefits are being provided through a program called Pandemic Emergency Unemployment Compensation (PEUC). Next week the first wave of people who lost their jobs due to pandemic will start receiving these extended benefits.

Additionally, there is third tier of benefits called extended benefits that lasts 3-5 more months after PEUC ends as long as mass unemployment persists, but fewer people qualify whereas all qualify for the first extension. It is likely that tens of millions of workers will end up collecting a full year of unemployment because of the mishandling of the pandemic.

Lastly 11 million undocumented immigrants are ineligible for unemployment and have been exploited in their work more than usual if they can even find work. They grow our food, work in meatpacking plants, cook our takeout, make our masks, staff our warehouses, and run our factories. They also did not receive the $1200 stimulus checks that most Americans with legal status were able to get in spring and have been left out to dry. The only aid they qualify for so far is eviction protections.

The US unemployment system is a wreck, in part because the US has less regulated form of capitalism than most developed countries, wherein workers are intended to suffer while unemployed because being unemployed is seen as moral failing.