Los Angeles Protests over George Floyd Murder: A New Movement in the Making

Summary: First-hand account of Los Angeles protests against racist police murder of George Floyd and its relationship to systemic racism and capitalism — Editors

For 7 days in a row, the United States has witnessed massive nationwide protests against the racist killing of George Floyd by the Minneapolis Police Department. Tens of thousands have flocked to the streets in over 100 cities and towns in the country to demand justice for his death. The kind of developments we have seen unfold through this week can only be described as a popular, multiracial, working-class youth uprising.

Some months ago, members of IMHO-LA discussed ongoing global revolutionary movements and contemplated what could spark similar mass protests in the US. At the time, it seemed hard to imagine that we would experience a massive, nationwide popular uprisings under a unifying cause, especially as the threat of the pandemic grew larger.

Two months into the pandemic, working class conditions have unarguably been devastating. Over 40 million are unemployed and struggling with income, food and rent security. The government has repeatedly bailed out and assisted big businesses and banks with trillions of dollars in aid while throwing out leftovers to working class Americans. At a conservative estimate, 105,000 have already lost their lives since March. Additionally, the pandemic has disproportionately hit Black communities across the country and has devastated thousands of Black lives. This is in view of the fact that Black people generally do not have the luxury of not working, are more likely to work essential jobs, and to thereby be exposed to the virus at a higher rate.

In reality, the pandemic has aggressively exacerbated existing social and racial inequalities. The hardship and privation in Black and Brown communities largely goes on in silence, especially under the pandemic. George Floyd’s cries to breathe have simply thrown gas on the already raging, out-of-control fire that is the marginalization of Black lives in the United States. Coupled with the unprecedented, violent conditions working class people are continuing to face during this pandemic, the nationwide rebellions are undoubtedly a monumental turning point for the Black struggle, the fight against police brutality, and, hopefully, for a reimagination of class struggle in the USA.

During protests on Los Angeles streets, police brutality was all too common. Over 1500 have already been arrested in massive police crackdowns, giving LA the highest number of arrests nationwide. Protesters have gathered in the thousands and occupied and blocked off streets — and sometimes highways — in Downtown LA, the Fairfax District, Beverly Hills, Westwood, Santa Monica and other communities and cities in the county since last Wednesday. There is vibrant outrage amongst the protesters armed with signs and masks, and who practice social distancing as much as possible.

On Wednesday, the first day of protests, furious crowds congregated and marched through different streets of Downtown Los Angeles in solidarity with protests in Minneapolis. Mostly young, multiracial crowds chanted “Black Lives Matter,” “Hands up don’t shoot,” “We can’t breathe,” “Fuck the police,” “No Justice, No Peace”, and George Floyd’s name. They blocked intersections, occupied streets, and called on those in their cars or out walking, to join them. Spirited crowds ran though a line of police vehicles blocking the entrance and marched on to the 101 freeway and occupied it for 15-20 minutes. It was a particularly exciting moment which was unprompted and decided collectively. Police violently side-swiped a protester on the freeway and quickly sped off. The severely injured man was left there for 15 minutes before an ambulance showed up and was attended to by first responders from the crowd. After the young man was sent off, the large crowd proceeded in its march to the Metropolitan Detention Center. There, in an amazing show of solidarity, the prisoners banged at their windows in support of the protesting crowds. Some groups, prominently BLD PWR in collaboration with Black Lives Matter [BLM], gave speeches under the tall correctional facility, vowed to keep the movement alive and urged protesters to consistently hit the streets.

On Saturday, protests raged through the wealthy Fairfax District and West Hollywood, all the way down to Beverly Hills. Protesters marched for miles and hours, chanting the popular slogans of the uprising. Organic decisions were made on the ground about which street or building to occupy, march down, etc., and Black voices were significantly responsible in making those decisions. Old cop cars were inexplicably left on some streets and were burnt and destroyed by protesters. Police moved in and cracked down on protesters as this happened, while many protestors assisted the individuals responsible to escape. White people were called upon to stand in front of lines of police to defend Black bodies from their batons and rubber bullets. There were many instances of confrontation with police, but the crowds were adamantly non-violent, actively avoiding unnecessary fights. At one point, the crowds made their way to Beverly Hills’ decadently affluent block of stores and tagged with graffiti all across their windows and doors. Popular tags included “BLM, “ACAB” [All Cops Are Bastards], “FTP” [F— the Police],  “Eat the Rich” (right under the famous Beverly Hills fountains), “Down with Capitalism,” and others. There was a strong collective hatred projected towards the inaccessibly expensive stores like Gucci, Louis Vuitton, Jimmy Choo, and the minor violence towards these stores was highly popular. It is important to note that protesters actively resisted cameras and shouted at those who recorded acts of violence to stop.

The media, as it does, chooses to focus on the “looting” of stores instead of the mass displays of mutual aid and camaraderie blossoming on the streets. It also obviously does not show how those acts are sanctioned on the street by the protesters. On several occasions, police incited violence by using tear gas against protesters occupying intersections. Amongst the crowd, there were some smashing store windows and attempting to break in. When police were not there, this kind of behavior was largely looked down upon by the crowd and stopped except for businesses they deemed fit for looting/vandalism. When police were there, however, they repeatedly responded to such acts with unjustifiable force instead of a strategic approach, violently disallowing the political message protesters want to project. The police have been overtly and excessively brutal at mass protests against police brutality. What more justification could this national uprising need?

The police response is not all too surprising. Like the crowds, they understood that the protests were largely unorganized and composed of young adults. Not many organizations were visibly present, and some time to make collective decisions was crucial. The police used that to their advantage and aggravated the already angry protesters on numerous occasions. The protesters, however, continue to hit the streets in great numbers.

The LA area witnessed further protests throughout the weekend and on Monday. Curfews have already been set and are gradually becoming earlier. Protesters have broken them and stayed on the ground. The National Guard has been deployed, and Trump has threatened to deploy the military. There are protests being scheduled for the upcoming week, though a lot of misinformation has been going around. Crowds have therefore gathered in hotspots independently and have joined forces. Bottles of water, hand sanitizer and other essentials have been spread around by protest goers. Violence has been unwaveringly monitored, as many are aware of the presence of undercover cops, irresponsible agitators, etc.

It is our committed hope that these protests and rebellions persist, and tactics employed by protesters develop. They have garnered great international attention and many cities worldwide have held rallies in solidarity with the uprising. It is hoped that this solidarity is acknowledged and cherished, from the rallies in London, Brazil, and New Zealand, to the portrait of George Floyd on a demolished building in Idlib, Syria. Global anti-racist solidarity is an anti-capitalist, anti-patriarchal, ecological movement!

It is heartwarming to see such justified, righteous anger throughout the country, and especially on LA area streets. A new movement is in the making and a new generation is pioneering it. This movement is actualizing itself in a way that realizes something existentially important: American society continues to strip Black and Brown bodies of their dignity and put its knee on the neck of their humanity. Through the police and the DA’s office they still do this. Through state institutions and media portrayals they still do this. Through capitalism they do this. This uprising is against all of it, all of them. This movement will give back the breath stolen from Black and Brown communities, and it will reach far and wide.

Black Lives Matter. Down with white supremacy. Death to capitalism. No justice, no peace. 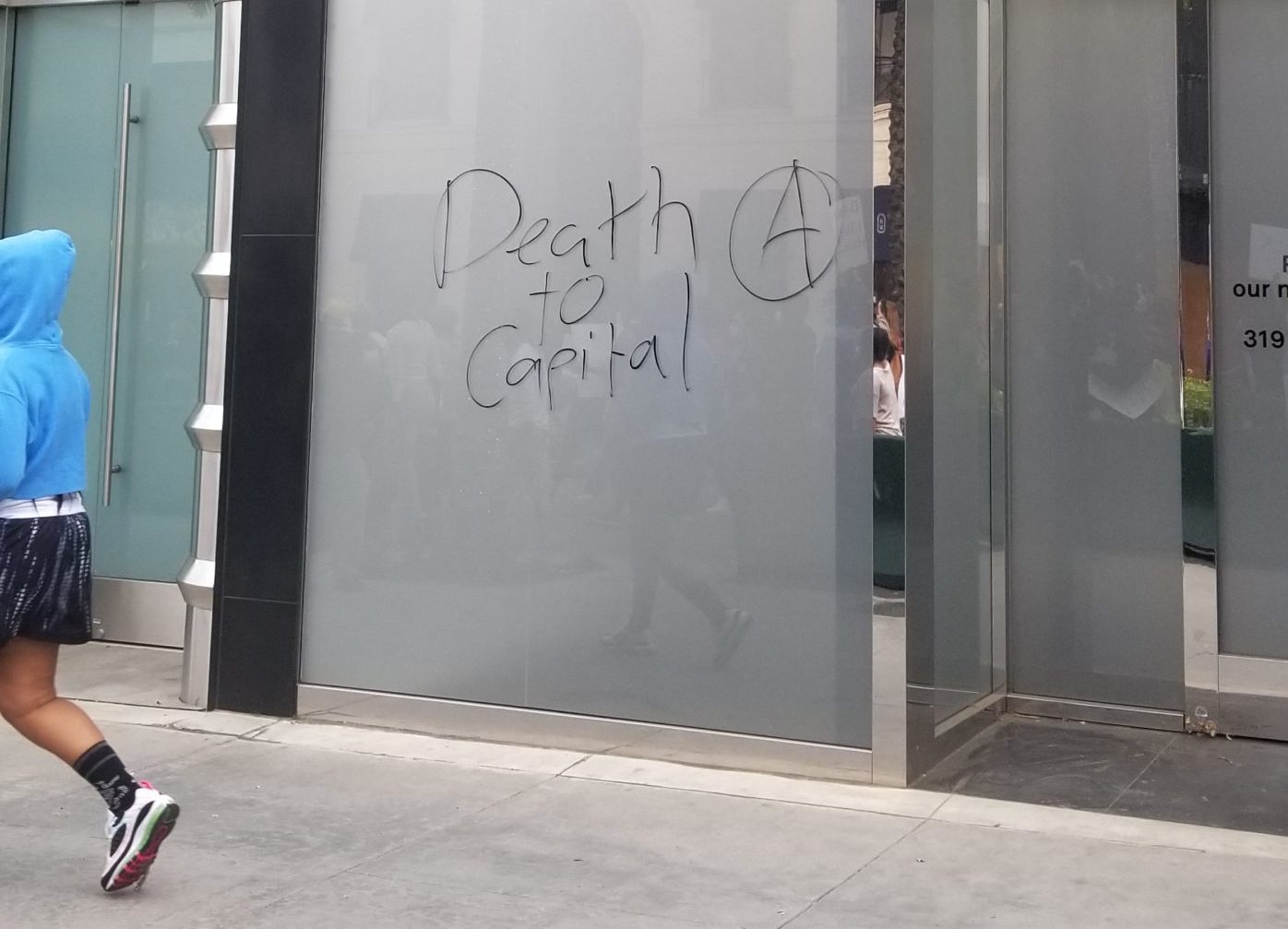