Summary: Author takes her daughter to protest against immigrant detention in the Rogers Park neighborhood of Chicago organized by the Little Village Solidarity Network — Editors

I was able to attend a rally against immigrant detention in the Rogers Park neighborhood of Chicago today. Called “Zero tolerance for Migrant Detention“, it was organized by the Little Village Solidarity Network and other supporting organizations. 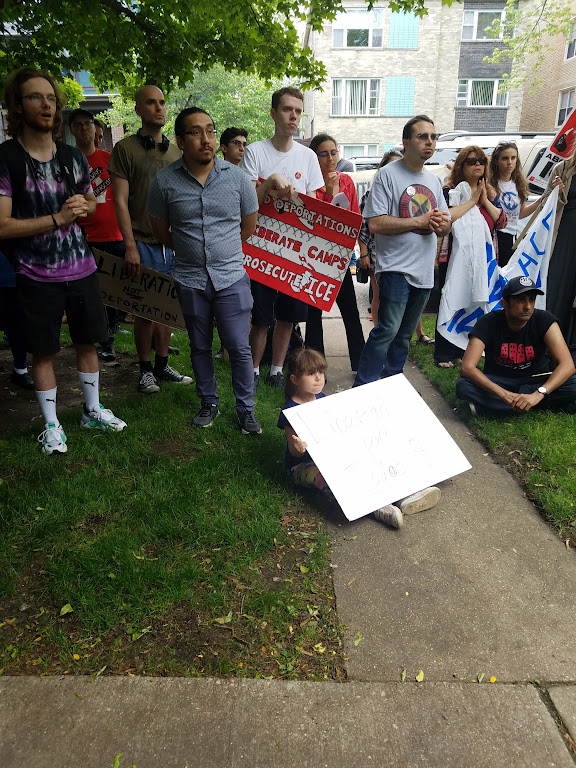 My schedule unexpectedly opened up, so I was able to attend. I was spending a lovely Saturday with my daughter today. I had taken my 5 year old daughter to brunch after her swim lesson. We went to a playground nearby and ran into the Music in the Parks program, which had stationed a piano and a piano teacher in the park who patiently taught her and other kids how to play a few notes. The other children seemed to be siblings from an immigrant family; perhaps Ethiopian. Even as we were enjoying this cherished and rare mother daughter time, I had been despondent about not being able to attend the protest against immigrant detention centers that was starting soon. It was not far from where we were at the moment and I really wanted to go. It felt important because I feel so powerless. It would be good to be in community with organizers and be reminded of our collective power. It would be good to confront the ugly corollaries of the shallow sense of safety and well being I was cultivating for my child this morning.

Well, the universe made it possible. My partner was able to continue looking after our twin toddlers so that my daughter and I could have more of our rare one on one time together. My sense of relief for being able to attend the protest was soon disrupted by the realization that I will have to tell my 5 year old what the protest was about and why we were going there. How do you tell a young child that children as small as her and her toddler brothers are being separated from their families and jailed? 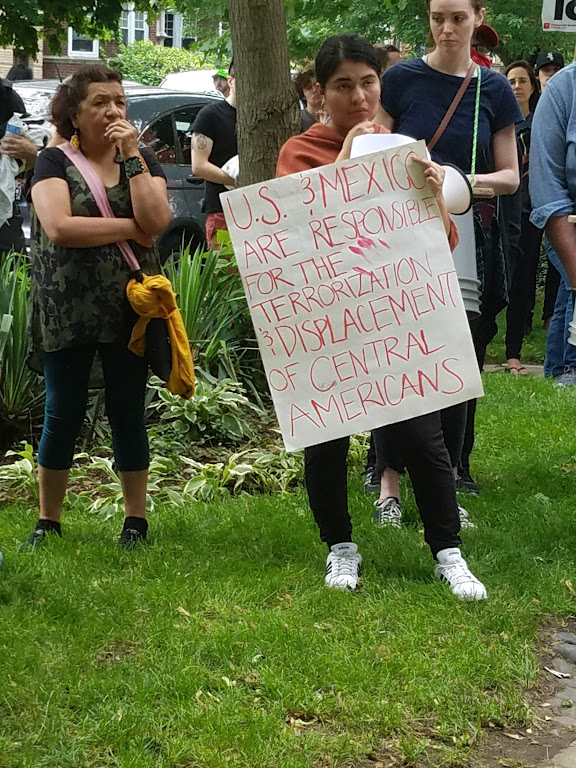 After thinking it over for a few moments, I decided to be direct. I told her that I wanted to go to a protest with her because some people were putting kids and others in jail. We were going to go to where they were and demand that they free the kids. We talked about how nobody should be in jail, something we have been discussing since her school brought in police officers to show off their fancy squad car and talk about how they “put bad guys in jail” to keep everyone “safe”.

She walked beside me as we headed to the car and started singing a song about demanding the release of the “children and everybody”, and breaking down prisons, and saving the day. And taking care of the earth because that is always a given with her. She is big on ‘saving the day’, inspired by PJ Masks and other heroes. On the car ride over, she kept singing a very thoughtful, compassionate, powerful song about saving/freeing the children. We thought up and chanted chants. I think protest songs and chants were more comforting than sitting with the idea of kids in jails. But I know my daughter takes her time to think and feel things through. She will be asking me a lot of questions soon. 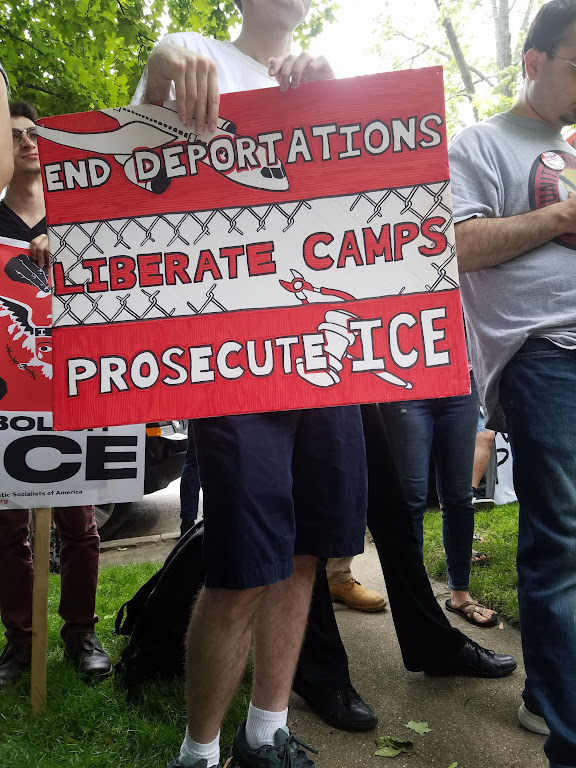 We gathered at two Heartland Alliance run “shelters” in the heart of East Rogers Park, a prosperous and diverse, progressive neighborhood on the north side of Chicago; home of the north campus of Loyola University. The facilities looked deceptively like houses. I would not have given them another look if it wasn’t for the 80 – 100 people gathered outside. You can see some of the signs in the pictures. “Abolish ICE” was one of them and my daughter asked me what it said. I gave her a short and simple explanation: “ICE is a government agency that captures immigrant people and puts them in jail or throws them out of the country. We don’t want anybody to be treated that way. So, we want to make them stop.” She nodded. As I was wrestling with whether this was a good opportunity to bring up borders agian, or to wait till after the protest, she took my hand and led me to the front of the protest.  Right next to the speakers. She really wanted to be there. And to know what people were saying. She was absorbing and listening, applauding, and chanting. She wasn’t just a kid brought to a protest by her parent. She was leading me and directing our participation in the protest.

As the organizers ended the protest with chants of “No estas solo” to let the children inside know that we were here with them, she asked me what they were saying and started chanting with them, banging her little hands on her cardboard sign which said, “Libertad para todos.” 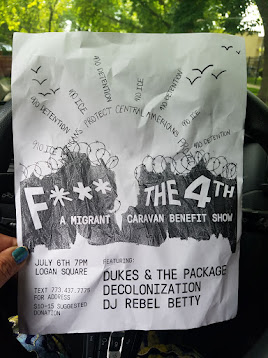 A word about Heartland Alliance. It is a huge nonprofit, which has worked with refugee communities for years. However, they are working with the government, on contract with the government’s refugee resettlement program, housing “unaccompanied minors”. They claim that their internal investigation has revealed no abuse of children, contrary to reports in the NYT and other papers. Their keynote speaker at their annual shindig this year was Hillary Clinton. ProPublica and Mother Jones published an expose of their “shelters”, showing how hand in glove they work with immigration agencies. It lays bare how seemingly innocuous nonprofits are actually willing accomplices in terrifying government policies, helping the government with their dirty laundry. Democratic Socialists of America (DSA) folks also organized a protest against their “shelters” a few days ago and some DSA members were present at today’s protest too.

Not only did this protest take place on the anniversary of Trump’s family separation policy going into effect, but also during an expected onslaught of ICE raids this weekend. While the Trump administration announced a delay in the raids, unverified reports of ICE raids are coming in. The city is in the grip of palpable fear. My newly elected alderman, Rosanna Rodriguez’s office has been holding know your rights trainings, recruiting volunteers, and disseminating useful information. Chicago’s new Mayor, Lori Lightfoot, has made a couple of moves to declare the city unhospitable to ICE, including forbidding the police department to cooperate with ICE. However, due to carve outs in the sanctuary city ordinance, secured by Chicago’s last Mayor, Rahm Emmanuel, the Chicago Police Department works with ICE to report folks on the much maligned Gang Database. Illinois Governor Pritzker just signed three separate bills to protect immigrant rights. 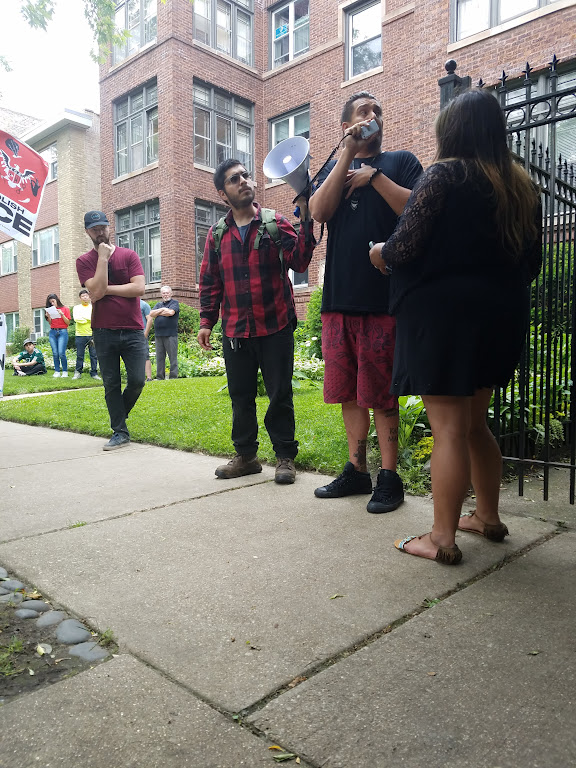 One bill banned local police cooperation with federal ICE immigration enforcement. Another bill banned the construction of any new private immigrant detention centers in Illinois. However, many organizers call it a smokescreen, pointing to the Dwight Detention Center downstate. They don’t trust the enforcement of the bill and think that Dwight may actually become operational.

The speakers and organizers shared a couple of upcoming events that they want people to support and come out for. The flyer for one is here: F*** the 4th. A Migrant Caravan Benefit Show on July 6th at 7pm in Logan Square. Others they will share on the protest’s event page. Further Readings and Resources for Action

1) The Chicago Teachers Union issued an  excellent statement in defense of their immigrant students and families. It inlcudes a list of great resources for organizing against raids and supporting people at risk.

2) In headlines that sound like a sarcastic late night news flash: Advocates say the Fastest Way to Help Immigrants Separated From Their Children: Post Their Bail. There are several immigrant bail funds and here is the link to one of them.

3) In conjunction with efforts to bail immigrant/refugee/asylum seeker detainees, there are is a 4th of July fundraising initiative to bail immigrant parents out. Follow these twitter accounts to support and inform as many people as possible: @MsKellyMHayes @RehmahSufi @IMHO_Journal. Follow the hashtag: #FreedomDay on Twitter and this event page on FaceBook.

4) There are vigils being held around the country on July 12. Details here.

5) There is a mobilization of Japanese American detainees of internment camps as Tsuru for Solidarity. You may have seen coverage about their action on June 22 when they protested the site of an internment camp being turned into a prison camp for refugees. Follow them here.

6) Wayfair, the online furniture and home furnishings giant, is going to supply furniture for some camps. Their employees protested and tried to convince the company not to cooperate with the government on its policy of imprisoning children. Over 500 employees walked out at their headquarters in Boston. The editorial board of the Wall Street Journal published a scolding editorial. You can follow them here: @wayfairwalkout.

7) There is a Chicago specific immigrant caravan support event on the 6th of July, mentioned above.

8) On July 13, there is a demonstration in Chicago to Take Action to End Criminalization, Detention, and Deportations.

8) Here is a great list of resources and ways to assist support efforts.

← Stop US Imperialist Moves against Iran! For the Liberation of All the Peoples of the Region! Italian Dockworkers Show Solidarity with Migrants →