A New, Deeper Uprising in Iran

Summary: When the Islamic Republic of Iran spiked the cost of fuel for ordinary citizens on Nov. 15, the protests and brutal repression that followed uncovered deep, mass hatred of the regime. This report was written during those events — Editors

Mass protests continue around the globe, from Chile to Hong Kong and from Lebanon to Iraq, and most recently in Iran. The protests in Iran broke out after the government said it would raise the price of oil by over 50%, which in turn tripled gas and fuel prices 300%. Official reports indicate more than 200 were killed in clashes between demonstrators and police as the government gave a green light to riot police to crack down on demonstrators to crush the movement. Reports from people suggest the number of dead is far higher since police are shooting at the demonstrators from the air with helicopters.

Supreme Religious Leader Ali Khamenei, President Hassan Rouhani, and a number of other Iranian officials threatened demonstrators resisting the government. Iran’s Revolutionary Guards (IRGC) have threatened the immediate execution of leaders and tough action against those arrested if unrest continues. More than 1,000 have been arrested. 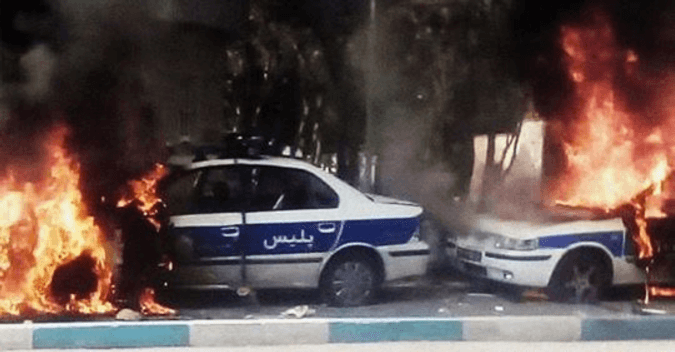 While Iran’s fuel prices are still among the lowest in the world because of government subsidies, the hike comes on top of inflation and during a recession due to US sanctions. These bring heavy blows to the people of the country, the majority of which are under the poverty line. US-imposed sanctions have been tightened since 2018. Inflation is at 40% and the economy is expected to contract 9% this year. That is why we saw a such an explosion of anger at the government when the protesters in Iran clashed with police on Nov. 16 in more than 12 cities. By the next day we had riots in more than 50 cities including Tehran, the capital.

Iranian state media reported direct attacks on buildings by protesters. According to a report from the Islamic Republic News Agency, people attacked a fuel storage warehouse in Sirjan and tried to set it on fire. Many poor middle-class citizens, who have seen their savings evaporate as the national currency (the rial) collapsed, have taken the opportunity to express their dissatisfaction with the government.

The National Security Council ordered internet services closed. During the similar protests in January 2018, authorities shut down the internet for a day or two. But this time is different and it is unclear how long Iran will remain cut off from the world. Most news we hear from Iran is through personal contact by phone, which makes it hard to confirm.

The government said on Nov. 17 that the country was “calmer,” but the situation on the streets tells a different story. Reports by citizens show that demonstrations are continuing in a lot of places. Schools in dozens of cities were closed. By Nov. 17 the protests had reached some 100 cities and towns, the semi-official Fars News Agency reported. At least 100 banks and 57 shops were set on fire, and about 1,000 people were arrested. Government prosecutors are accusing arrestees of being agents of US-Israel “sabotage,” according to the semi-official Mehr News Agency.

The protests in 2018 were mostly in small cities, but this time is different. Videos posted on social media by people in Iran show protests in number of larger cities such as Tabriz, Isfahan, Kermanshah, Sanandaj, and Shiraz, as well as Tehran. In Shiraz, after people took over police station, anti-riot forces shot at people from helicopters.

By Monday morning, Nov. 18, state broadcasters were reporting that security forces had prevented armed protesters from seizing military bases and police stations. President Hassan Rouhani was threatening a crackdown, but the rebellion continues.

Unlike the massive civil protests that erupted after Ahmadinejad came out on top in the sham presidential elections for second term in 2009, the unrest this time is not largely confined to Tehran and the other large cities. It’s coming from everywhere. And unlike the smaller 1999 uprising, the main protest did not start by students. 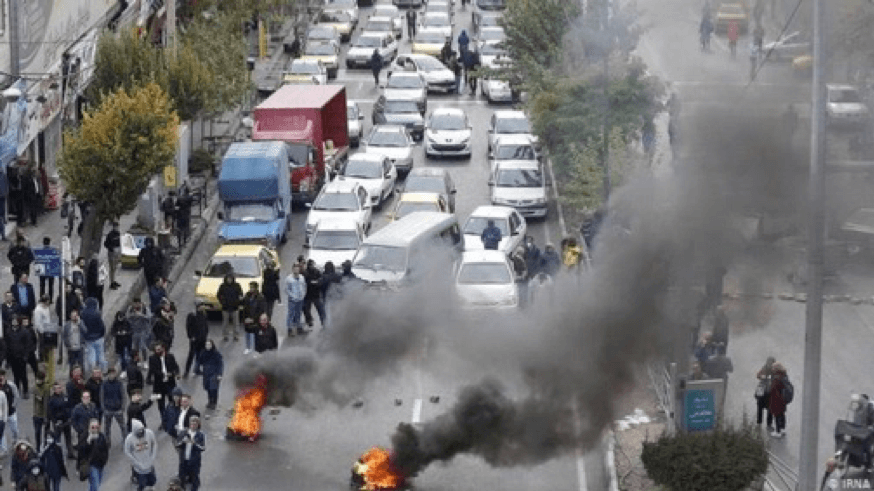 This time, ordinary working people were in the streets for the first four days of revolt. And an eruption in Qom, the Shia holy city, the first day of the protest, Nov. 15, with people shouting “Khamenei, leave the country!” shows they are aiming at symbols of the Islamist government. Disparaging Ayatollah Ali Khamenei, Iran’s Supreme Leader, is a crime punishable by death.

Revolutionary spirit has grown as the number of protesters grows. The regime is scared. This time the people are unafraid of the police — but the police are scared. I see these protests as more than an economic revolt. Iran’s sub-imperialist behavior in the Middle East was put into question with slogans such as “Death to Hezbollah” and “No to Syria.” Posters of Khamenei are being burned and statues of Islamic Republic founder Ayatollah Ruhollah Khomeini (famously with his ringed finger) are pulled down. In Mashhad, another religious center, the governor’s house was set on fire, as were religious seminaries. On the streets, some are even saying they don’t want an Islamic republic.

Iran’s private sector constitutes about a quarter of the country’s gross domestic product. The rest of the economy is taken up by regime institutions and by the “semi-private” sector, which is dominated by the Revolutionary Guards (IRGC). This type of state capitalism depends on oil revenue and that is why newly impoverished Iranians are raising slogans that directly attack the IRGC.

At this moment the Iranian people need help and support from Marxist, humanist, and progressive forces and the working class. Even though the people are not armed, they are ready to defend themselves. But because of lack of both leadership and of the articulation of an alternative to the system, they do not know what path to take to overthrow the government. But one thing is clear — the majority of people question the government as a whole and want their own in its place.

← Counterrevolution in Bolivia: Its Roots and Result Long Live Democratic Uprising in Iran →