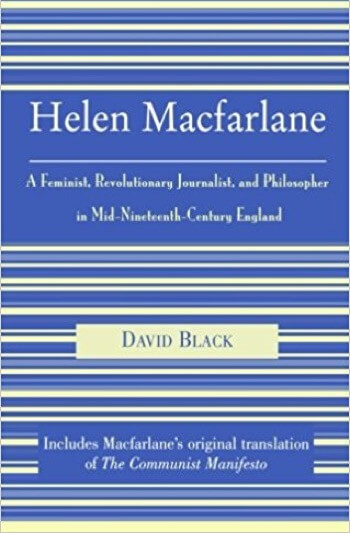 Helen Macfarlane, a young British woman, was living in Vienna when she was radicalized by the 1848 Revolution. On returning to England in 1850, she became a journalist for the radical wing of the Chartist movement. The Chartists received support from such luminaries as Karl Marx and Fredrich Engles; the latter had written on the movement’s political significance. It was Marx who described Macfarlane as the most original writer in the Chartist press. Macfarlane was the first English translator of The Communist Manifesto. Her original translation is included in this edition. She is also the first of the British to comment, critically and extensively, on the revolutionary implications of Hegel’s philosophy. After having been hidden for a century her stature as a revolutionary, writer, and feminist emerges in David Black’s seminal work. With diligent research into her life and work, Black, in Helen Macfarlane: A Feminist, Revolutionary Journalist, and Philosopher in Mid-19th Century England, recreates her intellectual and political world at a key turning point in European history. This work also includes Macfarlane’s original translation of The Communist Manifesto.
Helen Macfarlane was a truly remarkable figure: the first translator of The Communist Manifesto, an early socialist who discussed Hegel, Christianity, and revolution, and a merciless critic of all forms of domination, whether by class, race, or gender. She flickered briefly across British radicalism before disappearing from the historical record. Dave Black has done a marvelous job of excavation, contextualization, and careful analysis, giving us the first-ever book on Macfarlane’s life and work. An additional merit of this volume is the reprinting of Macfarlane’s sometimes very beautiful translation of the Manifesto.

– (Kevin B. Anderson, co-editor of Marx on Suicide)

David Black has rendered British social history – and the history of Chartism in particular – as well as the history of socialist ideas in Britain a distinct service by devoting a book-length study to this remarkable woman.

In Helen Macfarlane: A Feminist Revolutionary Journalist and Philosopher in Mid-Eighteenth Century England, David Black has done astute historical detective work to rescue from erasure a key figure in socialist history. Under the alias of “Howard Morton,” Helen Macfarlane wrote the first English translation of The Communist Manifesto for the magazine The Red Republican. An active member of mid-nineteenth century British socialist circles, she contributed to the direction of radical dissent and the legacy of Chartism. Rich in detail, Black’s book maps out some of the major debates in which Macfarlane was involved and offers a fascinating archive for anyone interested in the prehistory of British Hegelian thought.