Summary: May Day extended into a week of distinctive protests by campus workers, women prisoners, and police reform activists, in resistance to the powers that be — Editors

South Side May Day 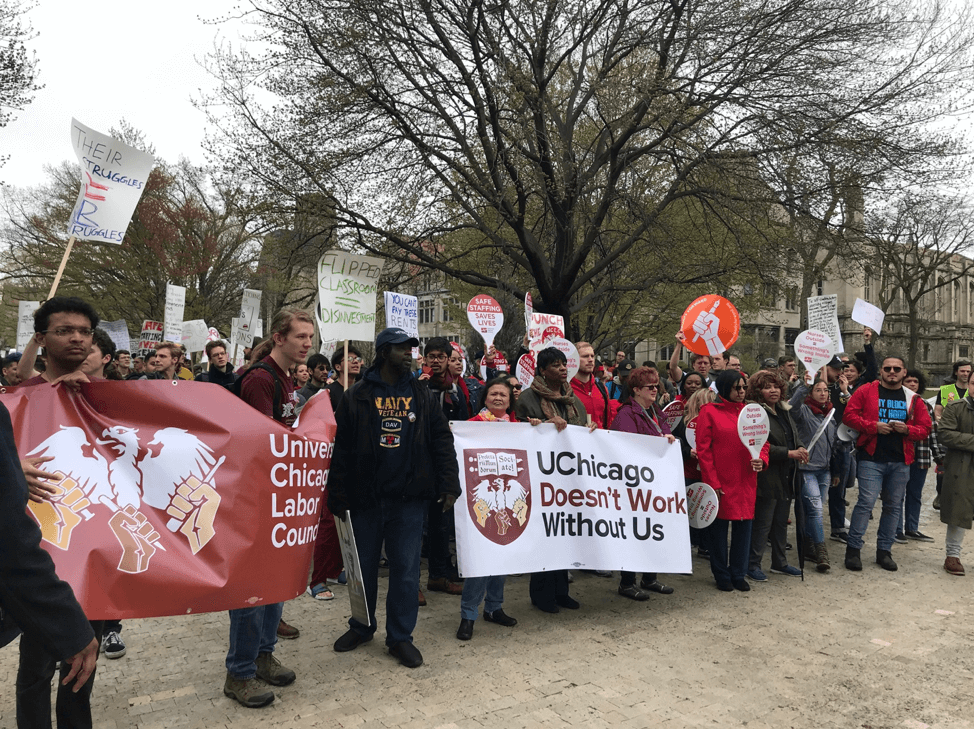 “UChicago Doesn’t Work Without Us” was the theme of a loud and energetic march and rally on Wednesday, May 1, international workers day, observed at the University of Chicago by about 200 university staff and supporters. A diversity of labor and community issues were represented at the event, organized by the UChicago Labor Council. Highly visible were the graduate student workers who have been pressing for recognition after voting in the Graduate Students United in 2017 and executing a one-day strike last fall. They declaim the hypocrisy of the university’s reputation for free speech while refusing to bargain with the democratically elected GSU.

A boilermaker and member of SEIU Local 73 told us that the administration maintains disparities between maintenance units with workers like himself, who do the same work. He also noted many members of his unit live paycheck to paycheck. A painter complained that whatever wage raises are negotiated are taken away by health insurance premium increases. And a campus security worker, who spends hours outdoors during the winter, said this year that his unit won warmer coats and access to campus bathrooms.

A registered nurse at the University of Chicago Medical Center explained to us why her union, the National Nurses United, was fighting back and participating in the event – unsafe patient-to-staff ratios, underpaid and under-valued nurses, preferential and unfair advancement practices, and lack of educational opportunities which impacts advancement. And several speakers pointed to the university’s history as adversary to community improvement and insensitivity of the campus police. One, representing Southside Together Organizing for Power, outlined the aims of a Community Benefits Agreement, needed to counter the community-destroying effects of the planned Obama presidential library. A group fighting the building of an immigrant detention center in Dwight, Illinois broke into the event’s agenda to issue a challenge: “Who are you here for? Are you here just for workers? These people work also. Our communities also work.”

The breadth of event was seen in the participating organizations: National Nurses United, Service Employees International Union Local 1, International Brotherhood of Teamsters Local 743, International Brotherhood of Electrical Workers Local 134, Bakery Confectionery Tobacco Workers and Grain Millers Union, Flood’s Hall, Tenants United (fighting to lift the city’s ban on rent control and against gentrification on the South Side of Chicago), Chicago Jobs with Justice, Greater Chicago Industrial Workers of the World, and Student Library Employee Union. The May Day statement by International Marxist-Humanist Organization, also participating, was received with interest at the event. 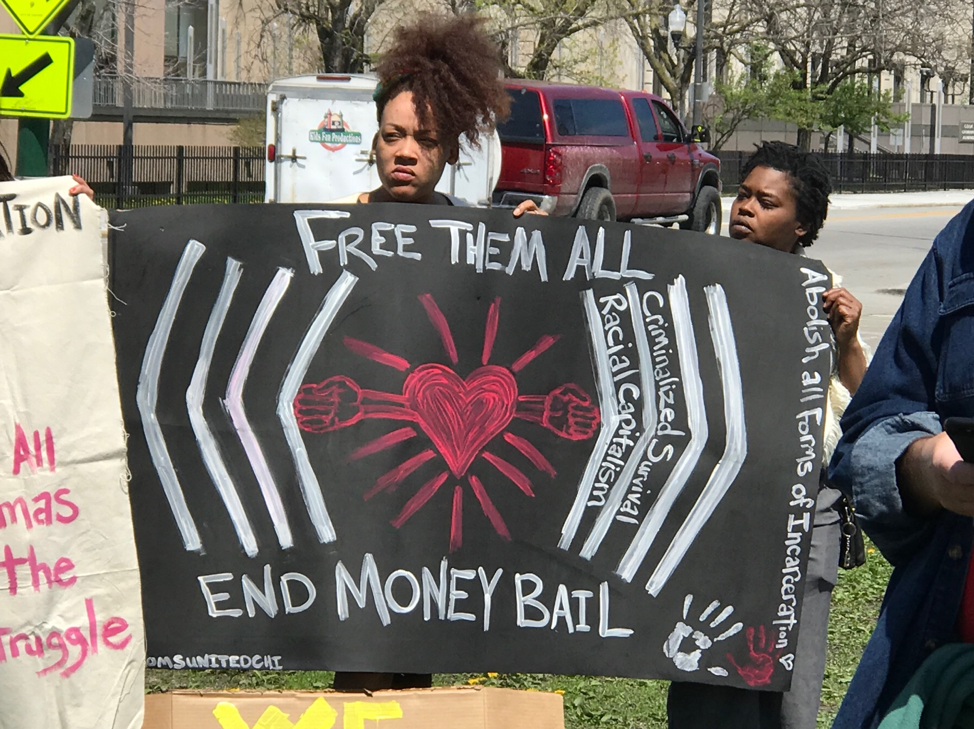 For an Incarcerated Mother’s Day Vigil, some 50 people gathered in front of the Cook County courthouse on Sunday, May 6. The event, the sixth annual of its kind, was organized by Moms United Against Violence and Incarceration. The event brought together women formerly in prison and the families and supporters of those currently incarcerated. This year’s vigil was dedicated to incarcerated moms in the Cook County Jail, the Logan and Decatur, Illinois women’s prisons, and those in jails, prisons, and detention centers as well as those shackled by electronic monitors around the country. “We’ll honor caregiving inside and across walls, though not all self-identify as moms,” pledged Moms United.

Monica Cosby, herself incarcerated for 20 years and dedicated to support and the rights of incarcerated and formerly imprisoned women and their families ever since, opened the forum. Speaker after speaker told stories of injustice and hardship. One woman described the generational impact of her incarceration on her daughter, who suffered from depression and feeling alone. Many kids like her track into the foster system. “Nobody seems to care,” she explained. “As adults, they have substance abuse problems and end up here.” She continued, “It’s an American thing, not just a black or brown thing. One in eight families have someone behind bars.” When she became free, she was banned from school events for her eighth-grade daughter because of her record, one example of overreach by the injustice system.

And the experiences of prison for women are exceptional, she concluded. “Ninety percent of women in prison are raped or abused. I’m one. The correctional officers are part of the problem. Women in prison deserve a #MeToo movement as well.” Others talked about how abuse by a significant other at one end of a path often leads to prison and family crisis at the other end.

Support Ho(s)e, an organization for sex workers, is petitioning Gov. Pritzker to release Alisha Walker, a sex worker who, under attack by a customer, defended herself, killing her attacker. After waiting for trial in jail for over a year and a half, she stood trial. Sex work and her person were disparaged on the way to her conviction and a 15-year sentence, even though no physical evidence was recovered.

Beverly Reed Scott of Soul Garden highlighted the work of the Murder Accountability Project and #50womengone, which is demanding that the state pursue the killer or killers of 50 women. The project uncovered a pattern to the murders, which contrasts with the state’s indifference toward catching possibly a serial killer. Scott declared that these women’s lives matter, too.

Melissa Hernandez stood to tell a personal and deeply moving story of abuse, addiction, and sex work. “I wanted to get out of the survivor mentality,” she said at one point. Even after prison and turning her life around, “I’m walking around with an ‘X’ on my back because of incarceration. I cannot even get a job at Walmart.”

Moms United is spearheading a campaign for people to ask Gov. Pritzker to grant clemency to Deborah Jennings. She and her children were subjected to abuse from her husband, who coerced her into a crime with him. While he was sentenced to 15 years and is out of prison, she has been incarcerated since 2000 for a 25-year sentence. She has incurable cancer. (Clemency was granted the day after the vigil.) The organization also supports Tewkunzi Jones, who acted in self-defense when, holding her infant son, she killed an abusive boyfriend in 2007.

Stand up to the Fraternal Order of Police 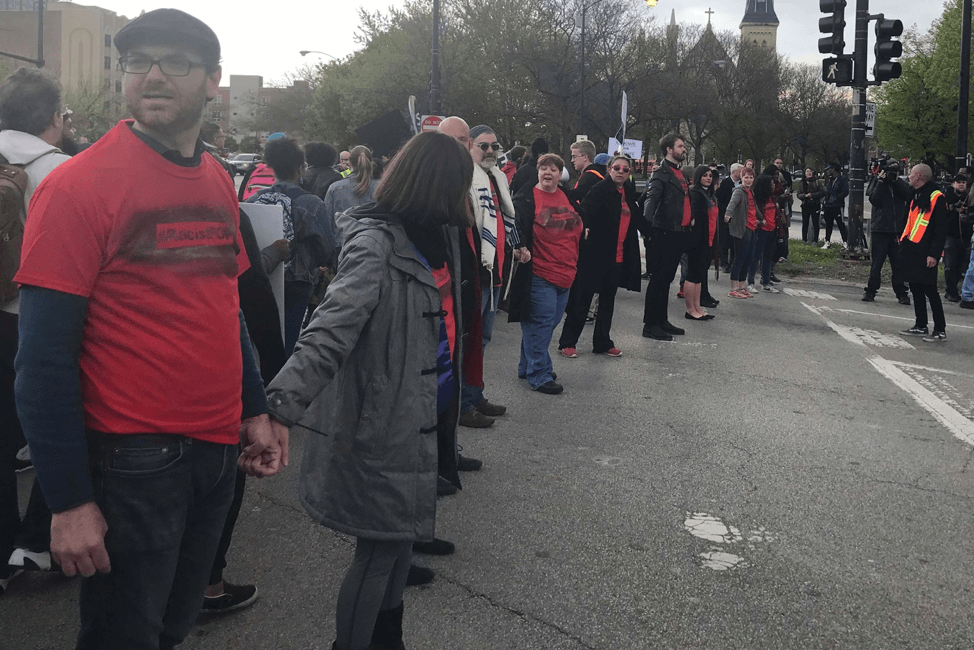 Moments before clergy sit down and are arrested, in protest of the racism of the Fraternal Order of Police in Chicago (Photo: J Turk/IMHO)

A dozen Chicago religious leaders sat down on Ogden Ave. where they were arrested on Monday, May 6. The civil disobedience was a challenge to Mayor-elect Lightfoot and the city council to stand up to the Fraternal Order of Police, whose offices were nearby. The FOP bargains for Chicago cops and for years its labor contracts with the city have protected lawlessness by its members. Along with a police union contract that is fair and equitable to citizens and does not allow police to get away with misconduct, murder and excessive force, the protesters demanded authentic community control of police in the form of an elected Civilian Police Accountability Council and that citizens, not racist police, decide what  criminal justice reform and restorative justice looks like in Cook County.

Under earlier city administrations, the FOP has enjoyed such rules as police need not provide statements until 24 hours after the CPD shoots someone. This allows officers to coordinate lies and establish cover-ups about an incident, a situation known as the blue code and which was exposed in the lead-up to the trial this year of officer Jason Van Dyke for the murder of Laquan McDonald. FOP President Kevin Graham staunchly defends the practice.

Until now, the FOP has also enjoyed a rule whereby the past complaints of brutality by an officer cannot be cited in a hearing about a subsequent complaint. Without this rule, previous complaints against Van Dyke for assaults on people he stopped or in his custody could have led to his dismissal years before he encountered McDonald in 2014. The FOP provided legal assistance to Van Dyke in his defense and even a job when the CPD suspended him. Other current rules protecting the police from accountability include the ability to change their official accounts. Also, complaints by victims of police brutality cannot be anonymous, inviting reprisals by cops.

When former CPD Commander Jon Burge finally was brought to trial and convicted of perjury in 2010, the FOP provided for his legal defense. The conviction was related to his lying about years of leading an extralegal outfit of cops who tortured dozens of mostly black men into confessing to crimes they did not commit, some ending up on Death Row. (A new book this year by Flint Taylor, The Torture Machine, documents this and a forty-year history of Chicago police murders and unjust convictions of innocent black men and women.)

Southsiders for Organized for Unity and Liberation organized the event – Rev. Kwame Pitts of SOUL opened the rally — along with The People’s Lobby, Reclaim Chicago, and Chicago Alliance Against Racist and Political Repression. Speakers from these and other organizations noted that the FOP has supported the white supremacist President Trump. And the Chicago FOP has been joined by white supremacists in a street protest against first term Cook County State’s Attorney Kim Foxx. FOP President Graham has gone all out to attack Foxx supposedly for her office’s decisions in the Jussie Smollett case. The truth is the FOP cannot tolerate an African-American woman who has ended the cozy relationship between racist prosecutors and the police, which formerly fast-tracked black and poor defendants into the prison gulag.

The FOP has fought the Federal consent decree, approved this year, to end the status quo of racist police rule over city residents and unaccountability to any agency. Yet this week the FOP asked to become part of the decree in an attempt to safeguard the rules, enshrined in its contract with the city, which protects its members from being called to account.

Anthony Clark from Suburban Unity Alliance/Our Revolution Illinois reminded the gathering that the original role of police in American was to subdue slave rebellions and catch runaway slaves, and later to enforce Jim Crow laws. And Aryeh Bernstein from Jewish Council on Urban Affairs declared that tolerance for Jews will diminish when Jews challenge the domination of police under capitalism.

Amidst the protest against the racism and influence for the FOP, a young African-American woman looked at the title of the IMHO May Day leaflet — “For a humanist alternative to capitalism” — and said excitedly, “This is true. Capitalism is why we have racism.” These three events show where capitalism is becoming more oppressive — and also that new subjects of revolution are organizing and rising to challenge the many local forms of Trumpist authoritarianism.