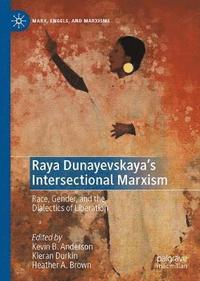 Raya Dunayevskaya is one of the twentieth century’s great but underappreciated Marxist and feminist thinkers. Her unique philosophy and practice of Marxist-Humanism—as well as her grasp of Hegelian dialectics and the deep humanism that informs Marx’s thought—has much to teach us today. From her account of state capitalism (part of her socio-economic critique of Stalinism, fascism, and the welfare state), to her writings on Rosa Luxemburg, Black and women’s liberation, and labor, we are offered indispensable resources for navigating the perils of sexism, racism, capitalism, and authoritarianism. This collection of essays, from a diverse group of writers, brings to life Dunayevskaya’s important contributions. Revisiting her rich legacy, the contributors to this volume engage with her resolute Marxist-Humanist focus and her penetrating dialectics of liberation that is connected to Black, labor, and women’s liberation and to struggles over alienation and exploitation the world over. Dunayevskaya’s Marxist-Humanism is recovered for the twenty-first century and turned, as it was with Dunayevskaya herself, to face the multiple alienations and de-humanizations of social life.

Kevin B. Anderson is Professor of Sociology, Political Science and Feminist Studies at University of California, Santa Barbara, USA. His previous books include Lenin, Hegel, and Western Marxism (1995), Foucault and the Iranian Revolution (with Janet Afary, 2005), and Marx at the Margins (2010/2016).
Kieran Durkin is Marie Skłodowska-Curie Global Fellow at University of York, UK and has been a Visiting Scholar at University of California Santa Barbara, where he studied the Humanist Marxist tradition. He is author of The Radical Humanism of Erich Fromm (2014) and  Erich Fromm’s Critical Theory (co-edited with Joan Braune, 2020).
Heather A. Brown is an Associate Professor of Political Science at Westfield State University, USA. She has written widely on Marxism, feminism, and ecology and is the author of Marx on Gender and the Family: A Critical Study (2012).

“Raya Dunayevskaya’s Intersectional Marxism truly addresses Race, Gender, Class and the Dialectics of Liberation, and the excellent book edited by Kevin B. Anderson, Kieran Durkin, and Heather A. Brown demonstrates the relevancy of Dunayesvskaya’s work for this era of crisis and tumultuous struggle and upheaval. The book engages both scholars and activists, and demonstrates how revolutionary theory can become a weapon of transformational practice.

—Douglas Kellner, Distinguished Professor, UCLA, USA and author of Herbert Marcuse and the Crisis of Marxism

Edited by Kevin B. Anderson, Kieran Durkin, and Heather A. Brown

1. Introduction – Kevin B. Anderson, Kieran Durkin, and Heather A. Brown

Part I: Hegel and Dialectics

2. Raya Dunayevskaya’s Concept of the Dialectic – Peter Hudis and Kevin B. Anderson

3. Unchaining the Dialectic on the Threshold of Revolution: Dunayevskaya’s Discovery of Hegel in the Birth of Marxist-Humanism – Alessandra Spano

4. The Indispensability of Philosophy in the Struggle to Develop an Alternative to Capitalism – Peter Hudis

6. Women as Force and Reason: Dunayevskaya, Marx and Revolutionary Subjectivity – Heather A. Brown

8. The Dialectic in Marxism and Freedom for Today: The Unity of Theory and Practice and the Movement of Today’s Concrete Struggles — Lilia D. Monzó

10. Why 21st century Marxism has to be Humanist – Paul Mason

11. On Capital Accumulation, the Tendential Fall in the Rate of Profit, and Crisis Theory – Karel Ludenhoff

12. The Revolutionary Travels of Marxism and Freedom – David Black

13. Why Marx is More Relevant than Ever in the Age of Automation – Paul Mason

15. Beyond Anti-Humanism: Alienation, Praxis, and the Dialectics of Liberation – Kieran Durkin

16. Two Kinds of Subjectivity in Marxism and Freedom: Hegel, Marx, and the Maoist Detour – Kevin B. Anderson