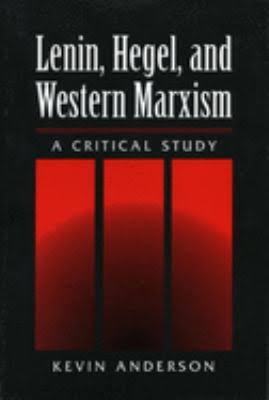 This book takes up Lenin’s extensive but little-known writings on Hegel, especially his 1914-15 noteBooks in Hegel’s Science of Logic. I argue that in these notes, Lenin broke with the crude materialism of his generation of Marxists and of his own earlier work like Materialism and Empirio-Criticism (1908).Â His confrontation with Hegel was part of a rethinking of his old categories in light of the crisis and break-up of the Second International (world socialist movement) during the First World War.Â  He drew from Hegel concepts like subjectivity and self-movement, and he also interrogated the possibility that the diremption between idealism and materialism advocated by Engels ran the danger of falling into a crude materialism that ignored subjectivity and human consciousness.Â  Instead, Lenin argued that human cognition not only reflects the world (in a materialist sense), but also creates the world (in the sense of revolutionary subjectivity). He concluded that it was impossible to grasp Marx’s Capital without a thorough study of Hegel’s Logic.

At the same time, certain limits were evident in Lenin’s dialectics, not only the fact that he did not make public his new thinking on Hegel, but also in his failure to grasp fully core Hegelian categories like negation of the negation, absolute negativity, or the relation of theory to practice.Â  Nonetheless, Lenin’s wartime studies of Hegel helped to give a richer, more dialectical quality to his subsequent and better-known writings on imperialism, anti-colonial movements, and the state and revolution. In particular, I argue that Lenin’s studies of Hegel helped him to create dialectical analysis of imperialism, in a double sense:Â  (1) Monopoly capitalism was the product of a dialectical “transformation into opposite” of the old capitalism and it engendered a new phenomenon, global imperialism. (2)

The rise of imperialism strengthened global capital, but it also led to new contradictions within the global capitalist system, to anti-colonial national liberation movements — from China and India to Ireland — as new forms of resistance that could ally with the Western working classes against capital.Â  In this sense, Lenin’s noteBooks in Hegel had more than a philosophical importance and were part of his wider break with established Marxism and his attempts to refound a revolutionary Marxism upon the ruins of the Second International.

This book takes up as well the considerable discussions of Lenin’s writings on Hegel by Western Marxists such as Karl Korsch, Georg LukÃ¡cs, Henri Lefebvre, C. L. R. James, Raya Dunayevskaya, Lucio Colletti, and Louis Althusser.Â  Here the positions vary considerably, with LukÃ¡cs and Korsch having discussed Lenin’s Hegel notebooks rather briefly, using his work to validate theirs at strategic junctures in the face of the crude materialism of Lenin’s successors.Â  A generation later, Lefebvre, James, and Dunayevskaya took Lenin’s Hegel notebooks up more fully, considering them to have been a crucial chapter in the history of Marxism, one that informed their own concepts of dialectic and which influenced their own studies of Hegel.

For Dunayevskaya especially, this was closely tied to the young Marx’s writings on humanism and dialectic in the 1844 Manuscripts as well.Â  For their part, Althusser and Colletti, who launched counterattacks against Marxist humanism and the post-World War II focus by critical Marxist thinkers on consciousness and the human subject. In doing so, they took up not only the young Marx, but also Lenin’s 1914-15 writings on Hegel, seeking to collapse them back into a more orthodox interpretation of Lenin and his legacy.

“With impressive argumentation and wide-ranging scholarship, Anderson presents us with a Lenin that no one seriously interested in current debates over the relevance of Marxist theory to socialist practice can afford to miss.”

“An important contribution to grasping the conceptual roots of Marxist theory and practice.”

“Today Lenin looks like he did little more than prepare the way for Stalin. You will find the opposite view in this novel study…. I recommend the book to anyone seriously interested in Russia and revolution.”

“Thanks to its impressive argumentation and wide scholarship, this book brings to life a new and unexpected Lenin, poles apart from both wooden “Marxism-Leninism” and dismissive Western scholarship…. Lenin’s NOTEBOOKS were published in the USSR in 1929, but Soviet Marxism nearly buried them, canonizing Materialism and Empirio-Criticism instead. While some Western Marxists, such as LukÃ¡cs, Bloch, Goldmann, Lefebvre, Marcuse, and, above all, Dunayevskaya, showed interest in them, others (e.g. Colletti and Althusser) either ignored or misinterpreted them, from a materialist/positivist standpoint, hoping to drive Hegel’s shadow ‘back into the night’ (Althusser)”

— Michael LÃ¶wy, CNRS, Paris and author of The Theory of Revolution in the Young Marx

“It sheds entirely new light not only on Lenin, but also on Hegel. Â Never before had I realized just how revolutionary in the practical order even the most speculative pages of a great philosopher could be. Â This study bears the unmistakable character of a good book, namely, that the reader wonders why it had not been written long ago.”

— Louis DuprÃ©, Yale University, author of The Enlightenment and the Intellectual Foundations of Modern Culture

Part. 1. Lenin on Hegel and Dialectics.

1. The Crisis of World Marxism in 1914 and Lenin’s Plunge into Hegel

2. Lenin on Hegel’s Concepts of Being and Essence

3. The Subjective Logic: The Core of Lenin’s 1914 Hegel Studies

4. Lenin’s Discussions of the Dialectic, 1915-23: An Ambivalent, Secretive Hegelianism

8. From 1954 to Today: Lefebvre, Colletti, Althusser and Dunayevskaya