Summary: Abortion rights demonstrators came out onto streets immediately after Supreme Court decision was made public, only to undergo outrageous attack by Homeland Security police and LAPD — Editors

Tuesday May 3rd, on the day after the US Supreme Court’s extremist decision to repeal Roe vs. Wade was leaked 1000 Feminists rallied starting at 6PM at the LA federal courthouse to defend women’s right to an abortion and to control our own bodies. Young women were a majority of the protesters and it is clear that American women are not going to sit quietly as religious fundamentalists try to strip us of basic rights we have had for generations.

The protest had a very impressive turnout on such short notice. Protesters were encouraged to wear green and green bandanas dotted the protest. Green bandanas are the international symbol of those fighting for legal abortions and came from Latin America where women mobilized in such massive numbers by the millions that they forced abortion to be legalized in several countries. 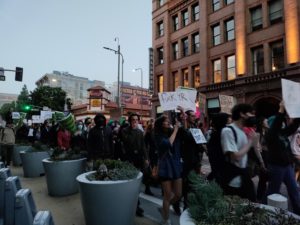 Speakers at the rally organized by Rise Up 4 Abortion Rights included a woman who had an abortion, gynecologists who provide abortions, a trans man reminding us that trans men need abortions too, and a woman who used to be anti-choice who talked about her journey to understanding that women need to be able to control their own bodies. Another speaker noted that the recent attacks on women’s reproductive rights stemmed from white supremacist anxiety about white women not having enough children and the browning of America.

Another young LGBT person also tied the struggle for abortion rights to the struggle for trans rights. They told the crowd that the same far right forces who are stripping women of their bodily autonomy are also passing laws that restrict trans people’s rights including trying to prohibit trans children’s parents from being able to make medical choices for their children that the far-right dislikes. Experts and even moderate President Biden have noted this ruling could be used to attack other rights like gay marriage and birth control. At least one speaker talked about how fascists were trying to take away our rights and impose their religious fundamentalist views on the majority of us by force.

Shockingly, as the rally was wrapping up at 9PM, federal police attacked women’s rights protesters with batons! Department of Homeland Security police were half a mile away from their jurisdiction, drove their car up to a crowd of a few dozen protesters, declared an unlawful assembly, and shoved protesters with batons. They were assisted by the LAPD, which helped them manhandle Feminists. Despite a disappointing initial report on protesters and police “clashing” the night of the protest, the LA Times later ran an article questioning why federal police were following a women’s rights protest on the streets of LA half a mile away from the federal courthouse, let alone shoving protesters with batons. 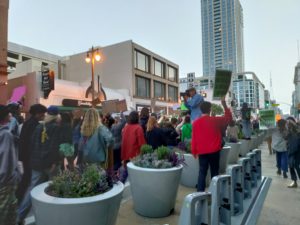 In 2020 DHS police attacked anti-racist protesters in Portland and kidnapped a protester into an unmarked van in a horrifying new chapter of authoritarianism in the US. The DHS was unleashed under Trump to attack protesters and this incident in LA proves they continue to be a rogue force that Biden has yet to rein in.

This incident summarizes the situation we find ourselves in now in the US: As a far right theocratic Supreme Court whose judges including a sexual harasser (Clarence Thomas) and a sexual abuser (Brett Kavanaugh) attack women’s right in the courts, violent authoritarian police attack our right to protest while the masses of women and allies fight back. It should also be noted that this theocratic assault is being perpetrated by rightwing judges most of whom were appointed by presidents that the majority of Americans did not vote for. At the time of this article abortion is still legal in the United States (except in Texas) and it will require millions of people in the streets fighting back to keep abortion legal from sea to shining sea. 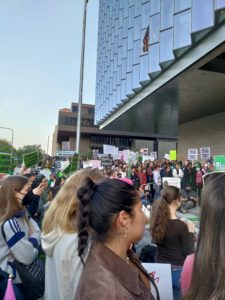 ← Why Sweden Should Refrain from NATO and Support Democratic Movements in Russia On the Frontier of Whiteness? Expropriation, War, and Social Reproduction in Ukraine →