Following the murder of George Floyd, Breonna Taylor and countless other racialized people at the hands of the police, a fight against racism and discrimination has spread around the world. The number of protests in Canada continues to grow, with groups in the thousands gathering across the country in major cities including Toronto, Vancouver, Calgary, Ottawa, Regina and Winnipeg.

Speakers included ME Lazerte High School teacher Andrew Parker, Sierra Jamerson, a singer and solo vocal artist, MLA David Shepherd, one of the few Black members in the Legislative Assembly of Alberta, members of the LGBTQ2S+ community, and others. 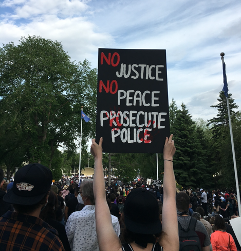 As I joined the group, holding a sign with “Black Lives Matter” painted in white letters, I could not refrain from thinking about the last time I had stepped foot on these grounds, around three years ago, for the Canada Day Pancake Breakfast to celebrate Canada’s 150 with hundreds of others.

Amidst the sesquicentennial celebrations, there was significant criticism over the millions of dollars spent on events and the lack of recognition of Indigenous history and the damaging historical legacies of colonialism.

When Europeans arrived in what would later become Canada in the 1600s, legal doctrines stated that the land was ‘empty’ and belonged to no one, and colonial governments granted themselves absolute title to the land. From that point on, Indigenous people have been subject to ongoing dispossession/oppression, assimilation, violence, systemic racism, and discrimination. The Indian Act, the Residential Schools, the White Paper, the Sixties Scoop, the ongoing murder and disappearance of Indigenous women and girls, and police brutality are just a handful of the unquantifiable number of policies and human rights violations that have harmed and continue to harm Indigenous peoples in Canada.

Land disputes such as the Oka Crisis (1990), the Wet’suwet’en Blockades (2020), and movements like Idle No More (2010) and others have become high-profile newsworthy events, yet, as Romeo Saganash, a Cree former MP says, “Canada doesn’t give a fuck about Indigenous rights”.

And it is true. The ignorance about racial injustice in Alberta and Canada experienced by Black communities and Indigenous peoples is an ongoing problem. Many Canadians have trouble grasping the presence of hate, police brutality, and systemic racism that is all around us. Just a few days ago, Ontario Premier Doug Ford said, “We’re different than the United States, we don’t have the systemic, deep roots that they have had for years”.

Protesters recognized these issues with signs such as “Canada is not innocent”, “It Happens Here Too”, “Canada was built on institutionalized racism”, and others listed the names of individuals who have been killed by the police in Canada. Just a few days ago, a 27-year-old Indigenous woman and mother of a five-year-old, Chantel Moore, was fatally shot five times by police in her home while they were completing a wellness check. In late May, though some of the details are unknown, a 29-year-old Indigenous-Black woman, Regis Korchinski-Paquet, fell from the 24th floor of her apartment building while the police were responding to her mother’s request for police assistance with a domestic conflict. 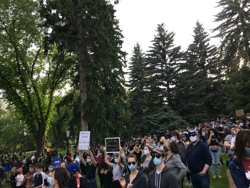 These are not rare occurrences in Canada. CBC’s Deadly Force report revealed that between 2000 and 2017, Canadian police were involved in at least 460 fatal conflicts with civilians; one-third of the victims shot by the RCMP between 2007 and 2017 were Indigenous. In Toronto, during the 17-year window, though Black people only represented around 8 percent of the population, they represented nearly 37 per cent of the victims. Many of these deaths are underreported and do not receive media attention. 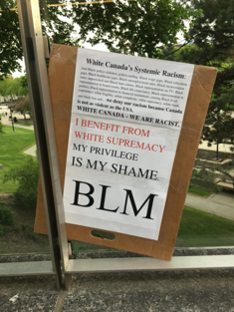 These movements represent a fight against the system of white supremacy that benefits white people everywhere. It is a fight against the dominant white cis-heteropatriarchal capitalist system that not only allows the murder of Black, Indigenous and People of Color (BIPOC), but also the oppression of LGBTQ2S+ individuals, the destruction of the earth through human-caused climate change, and the deepening of gross inequality.

In a 2017 Guardian article, Black Lives Matter co-founder Patrisse Cullors and fellow activist Nyeusi Nguvu wrote: “We are not saying that white people do not feel the impact of climate change. We are saying that if you are Black then you are more likely to die as a result of it… Unfortunately, due to rising global inequality – that remains part of the legacy of imperialism and colonialism, and part of the present reality of globalisation and capitalism – we also know that the resources required to respond to climate change’s impact are often not placed in the hands of the people who need them most.”

As we continue to collectively fight the novel coronavirus, let us recognize that there is another pandemic amongst us: racism. And, Canada’s not immune. We must stand together to dismantle white supremacy and forward racial justice, educating ourselves, listening, and allowing for the voices of the oppressed to be heard above all others.